Seeing less engagement on Instagram? The Shadowban could be to blame.

It sounds scary, and it’s buzz in lots of communities that rely heavily on Instagram for marketing. If your marketing is highly visual, anything that Instagram changes affects your business.

Shadowbanning sounds scary, especially because it’s very nebulous. Lots of people don’t know exactly what that means, and can’t tell if they’ve actually been shadowbanned or if they’re just struggling with low engagement.

Here’s what we know about Instagram’s policies, the shadowban, and how you can fix it.

Basically the Instagram Shadowban is what happens when your images don’t show up on hashtags. Nobody new can discover your business; they have to be a follower and see you in their feed for them to see your content.

This is not good if you employ hashtags in your marketing strategy with the aim of finding new clients/customers, or if your goal for instagram is simply to generate more awareness about your company.

How do I know if I’ve been #InstagramShadowbanned?

Your first clue: you should have a fairly consistent idea of how many likes/comments/overall engagement your Instagram content gets. So if you typically get 200 likes on a post, your first cue is that you only get 30 likes on a comparable post using the same hashtags.

Your second clue: most of the people who liked that photo are your current followers.

Your confirmation: this simple test will tell you if you’ve been #shadowbanned. Post a picture with your typical hashtags, then ask a friend to un-follow you (or perhaps a friend or family member who doesn’t yet follow you) and check the hashtag feed. If your picture’s not there, you could have been banned.

What?! Why would I be banned?!

Are you like the rest of us and keep a note in your phone with your same hashtags? So do spam bots. Some users are shadowbanned for using the same hashtags continuously on posts for extended periods of time. This is speculation, and hasn’t been confirmed by the team at Facebook/Instagram, but it can’t hurt to switch up your hashtags anyway (can someone say #newaudience?).

2. Using too many hashtags.

While we could go down the rabbit hole for hours on end of following/unfollowing new people, don’t do that. This could be a potential reason why FB/Insta would shadowban a user.

The same goes for serial likers. Think about how Instagram bots behave: they’re programmed to “like” lots of images on a hashtag feed in a row for an extended period of time. It’s hard for Instagram as a platform to discern between bot activity and human activity when they’re so similar, so it’s best to just assume the account is a bot and shadowban it to prevent spamming.

Any app that claims to be your Instagram magic bullet likely is not. Instagram states clearly in their terms of service NOT to use any automation services. Instagram knows you’re using these services easily. Whenever you sign up for one, you have to authenticate as an Instagram user so the automation platform knows what account to work for. It’s called an API, in tech speak. Instagram knows who’s built out connections to their API (they have to). So, the second you log in using a service, you’re immediately flagged as a spammy account. Yikes.

Instagram has publicly been cracking down on material. Hashtags that have inappropriate words in them (like #foodporn if you're a restaurant)could be filled with inappropriate spam posts (and no one wants to see that). So, do a thorough search and check about potential hashtags that may be flagged that you’re using. Even hashtags like #beautiful and #amazing can be interpreted by Instagram as spam hashtags.

Sometimes there’s an instant fix to finding the banned hashtag and removing that from your post. We can’t promise that will be an instant help, though. 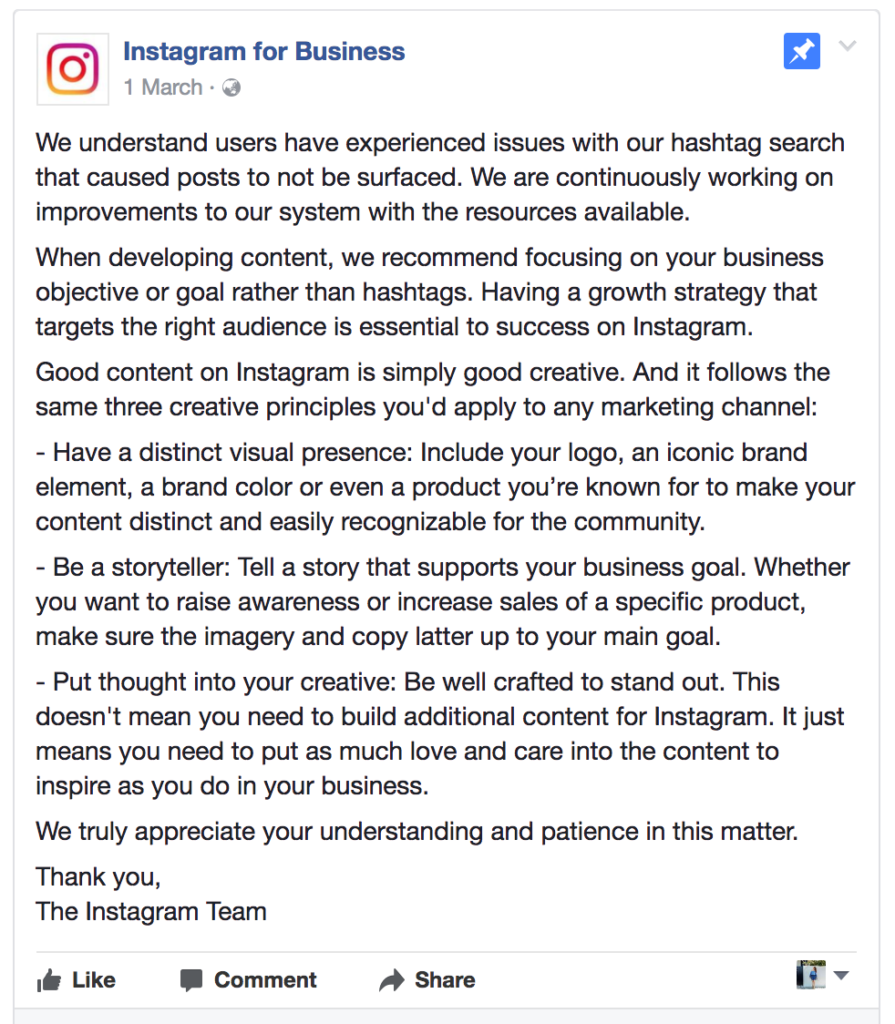 Which, has some points. But, for the sake of this article, we’re going to focus on hashtags.

Kaitlin Pierce from PierceSocial.com has dug into this and was able to get a hold of a customer service agent who spent time explaining to her what might be going on.

Upon further investigation, this was deemed intentional from the mouths of Instagram themselves.

Hashtags now have their own algorithm that impacts business accounts and personal accounts, flagged as business.

“The most detail that I can provide is that there is a unique algorithm that determines what qualifies a post to be high volume. It’s a combination of Likes, Comments, Views, and about 6 other variables and factors that determine which posts go in the area for Top Posts. The Top Posts will show up at the very top and just under that is the section for Most Recent. Essentially, the algorithm contains countless factors and for each user, it is different.”

So, how do I get #unbanned?

Well, don’t expect to call anyone and chat with them anytime soon to confirm a shadowban. Instagram and Facebook’s customer support teams aren’t exactly responsive, especially to individual people (they’re hired to cater to enterprises and publishers who pay Instagram and Facebook lots in ad revenue). In the meantime, here are some things you can try:

A synopsis geared towards marketers on the popular social media platform: Reddit

Harnessing Social Media for Enterprise of Every Size

Seeing less engagement on Instagram? The Shadowban could be to blame.

Marketing Manager at Zesty.io. Hooked onto the platform since first using it through the Zesty.io Incubator Program at the University of San Diego. Passionate about all things marketing, IoT, and helping businesses leverage technology to grow and become major players in their industries.... Learn More